When last we met, I had started to broach the subject of technique, practice and repetition. We are not born with technique, we must master it.  If you are to master it you must practice it so much that you stop thinking about it and become able to do it without thinking about what you are doing. Basically if you are doing it right, you do end up looking like you were born with it. Seems like a real shell game when you put it like that.

Watch an interview with a major athlete and they say things like: “We didn’t hustle enough”, “It wasn’t meant to be”, “We weren’t lucky enough to make it happen”, “We wanted it and we went out and got it.” It’s like they’re talking about evading a parking ticket.  In a situation where optimum performance means that you are not thinking about what you are doing, it’s not surprising that putting thoughts into words becomes like trying to force a square peg into a round hole.  Just doing it?  There is a reason that’s a trademarked saying.

After years of experience, introducing myself as an artist I still get the feeling that many people have a very schematic view of what being an artist means.  They want a round peg in a round hole.  They either assume that you are a Picasso–like, one-in-a-million individual that actually was born being able to do it, or they assume you’re not.  Most of us will not fit the schema of artist = Picasso, therefore they seriously don’t know what to make of us.

Well listen up now, even if you are Picasso, and you have mastered a lot of techniques, being an artist is a constant education.  There always seems to be more to learn.  My sculptural training involved carving in a much cheaper and softer material, plaster-of-paris.  I’ve been around art studios for close to 20 years now and although alabaster is a classical material to use, it’s peppered throughout art history; I’ve never seen anyone working with it in real life before.  I hope you enjoy this small peek at SHANTHI CHANDRASEKAR working on sculpting an alabaster block:

Transformations from one reality to another reality

From dream state to the waking state or from quantum mechanics to relativity, we are always in search of that ultimate truth that unfies everything. Our minds try to connect the dichotomy that exists all around and within us.  Is it possible to have a theory that combines it all? May be in another dimension or a parallel universe? Do the two aspects of a dichotomy, though seemingly disconnected, create a whole together? Like the warp and weft of the fabric?

I had lots of notes after my previous visit to Lisa’s studio. Not all of them made their way into the essay I posted after that visit, and maybe they won’t ever. Here’s an example of some that stacked up in a very different way: 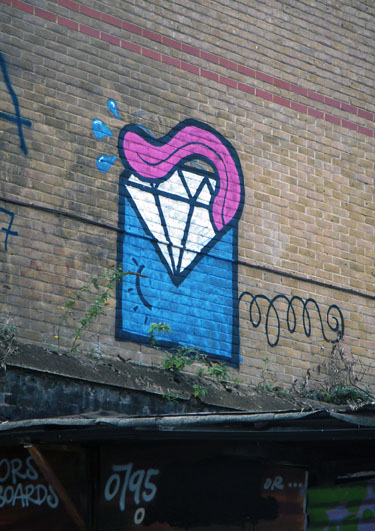 This bit of graffiti, that Lee Gainer found near Brick Lane in London, fits nicely with the theme of her decathlon works.  Curious?  Well, you’ll have to come see the exhibition in January now won’t you. 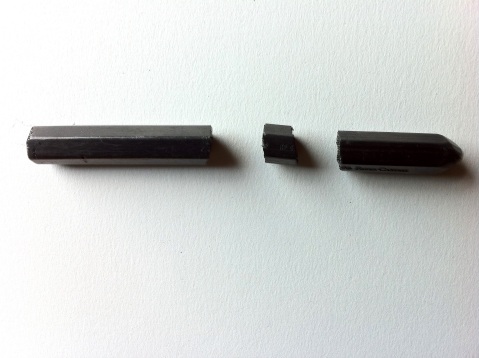 Shanthi is right, we cannot take things for granted.
we need to be flexible while keeping focused. To be able to continue when things do not go as planned.

One day I walked into my studio and found my graphite pencil on the floor, broken in three places.

It hurt. It upset my sense of order.

I find peace in placing objects in what creates a feeling of balance.

But of course it’s only a pencil…

the result was having to use the pencil differently and also to buy another.

I had to shift my perception.

I have been having conflicting emotions the last few days,especially after reading two news articles. When I read this article about the speed of light being superseded by another elementary particle, I was very thrilled. It was not that the light lost a race with a neutrino. It was just another proof that nothing was for certain in this world, universe or the cosmos or anything beyond or within. Just a couple of days before this article was published,  I was arguing with my three elementary school art students about the speed of light. I had told them that the speed of light is not the ultimate and I believed that there could be something else that could be faster. I jokingly added that my mind was one of them as I could travel anywhere in my mind and could easily beat light. And on a serious note explained to them that just because we cannot see something or be aware of it, it does not mean that it doesn’t exist. In my mind I added another thought that we humans need to realize that we cannot take things for granted and that we need to have humility inspite of all our achievements. Soon there would be a race to find out what is going to be faster than that neutrino?

The second article was a little disturbing to me. It was about scanning the brain and trying to figure out the visual images that come in our dreams. To know that my private thoughts could be scanned is pretty scary. This race to get ahead with technology and mystery breaking makes me feel very vulnerable.

Now what has all this got to do with my weaving project? Even though light might have lost to a neutrino in a speed race, it still holds a sense of mystery no matter what. This weave project means a lot to me personnally and winning or losing this competition is going to have minimal effect on me.

As Karen has mentioned in her comment,” it’s not whether you win or loose, it’s how you play the game”. Life is full of conflicts.  It is up to us to get rid of the complexities and find the simple path. One more conflict with regard to the project resolved today and found a new direction….. 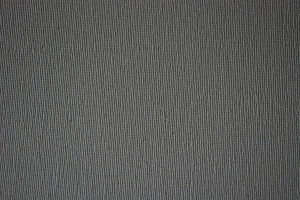 “No pain, no gain”, “all or nothing”, one liner aphorism that cannot be attributed to any specific person or situation?  As I mentioned in my bio, I was a high school athlete and I’ve heard all of these and worse in all kinds of contexts.  After meeting with the artist, SHANTHI CHANDRASEKAR, after her return from a more than month long trip to India, one of these koan like sayings is ringing in my head like a broken bell:  “In it to win it.” What does this mean?

In the simple parlance of high school sports coaches, that is what wins games.  When my junior varsity coach, Abby Normile (this is true) was screaming it at me on the basketball court I fully grasped that just because I was in it, did not mean I was going to win it.  It meant I better figure out what the H.E. double-hockey sticks was going on that basketball court and make 110% effort do everything (legally) in my power to either block shots or make shots.  And by the way, I better not waste anytime switching between the two.  In my experience, in situations like the above, logic-mind goes on a vacation and intuition and an auto-pilot-esque practiced repetition of practiced skills moves in.  It can be a real rush.  I’ve even say that there is a similar experience rush that can happen to the artist while working in the studio.  When you shut yourself off to your perceived limitations, remarkable achievements can often result.

But my studio visit with Shanthi and a chance run-in with this article  about Japanese “Noise Music” have given me pause.

In this article Matthew Mulane, argues that the Japanese economic bubble of the 1980’s was like “The eager athlete, caught in the hysteria of competition, inject[ing] steroids to ensure victory in the moment, in the now. The future threats of its use are ignored, forgotten, or simply lost in the frenzied pursuit of winning. ”[1]  When you are inclined to focus on the winning rather than the practicing, this steroidal attitude gets dangerous.  And it is not just economically invasive.  And it’s not just in Japan.  Frighteningly, this attitude seems to be able to pervade all areas of life at one time or another.

To some extent the avant garde will always crowd out the traditional.  But they don’t say practice makes perfect for nothing.  After visiting India with this project in mind and getting assistance from a number of family members, friends and occasional total strangers to record the pictures, videos and sound SHANTHI CHANDRASEKAR says that more than ever before she is feeling a personal responsibility to document and grow appreciation for traditional art forms that she was exposed to while growing up.    She’s likened this new directorial role to “having to learn to drive on the expressway.”  So many images and so many ideas, how to show all the layers and not lose focus?  This picture from her trip is poignant illustration of subtle challenges and changes that occur, without a thought to the consequences:  knots (a type of technology) being replaced by safety pins (another technology) all being made redundant by room-size automatic power looms that electronically weave patterns stored in a digital file.

But the discussion in Shanthi’s studio is always compelling and multi-faceted, and what I am still thinking about this time is her thoughts about the material and symbol of knots.  The simple knot is a reliable tool.  The complex knot is an artistic symbol of uniting opposing entities, or the endless connection of the present to both the past and the future.  Thinking about her focus on the knot and how it relates to The Weave,  I wonder, is it about overcoming disconnectedness that we all feel at one time or another?

“In it to win it?”  It’s pretty grim if you stop and think about everything it in terms of winning and loosing.   After all this reflection, I’m feeling like there may be no clear winning, no matter what we are talking about, even sports.  As a species we should spend more time realizing that its all really just exercising being able to keep track of it all, past, present and future, at all times.   Or, I guess I could have just said “it’s not whether you win or loose, it’s how you play the game”.